Heading into the third year of a wearying pandemic, America's health care workers report significant levels of burnout and even anger about the complications of politics and rising incidents of abuse from patients and their families.

But three-fourths of them still say they love their jobs, an exclusive USA TODAY/Ipsos Poll of doctors, nurses, paramedics, therapists and others finds. It is a show of resilience, not without some costs, among those who have been on the front lines of fighting COVID-19.

"The pandemic has actually made me realize how important this career is, and how I really do make a difference," said Christina Rosa, 33, a mental health counselor from central Massachusetts who has had to close her office and see patients remotely. "I still love it."

Even so, 1 in 4 report they are likely to leave the health care field, an exodus that would represent an enormous loss of medical expertise. Half say they are burned out. One in 5 report feeling angry.

"We're trying to help people here, and we are getting verbally and physically abused for it," said Sarah Fried, 53, of Santa Clara, California.

A nurse for 25 years, Fried now cares for leukemia and lymphoma patients in a hospital oncology unit. Like flight attendants who have been confronted by belligerent passengers, nurses at her hospital have been defied and even attacked when they tried to enforce COVID rules, including limits on those who can visit patients. Sometimes they have had to call security officers to help.

"Early in this pandemic, people were clapping for us and calling us heroes," Fried, a respondent to the survey, said in a follow-up interview. "And what happened to that? What happened to them appreciating what nurses are doing?"

How health care workers feel about going to work these days: 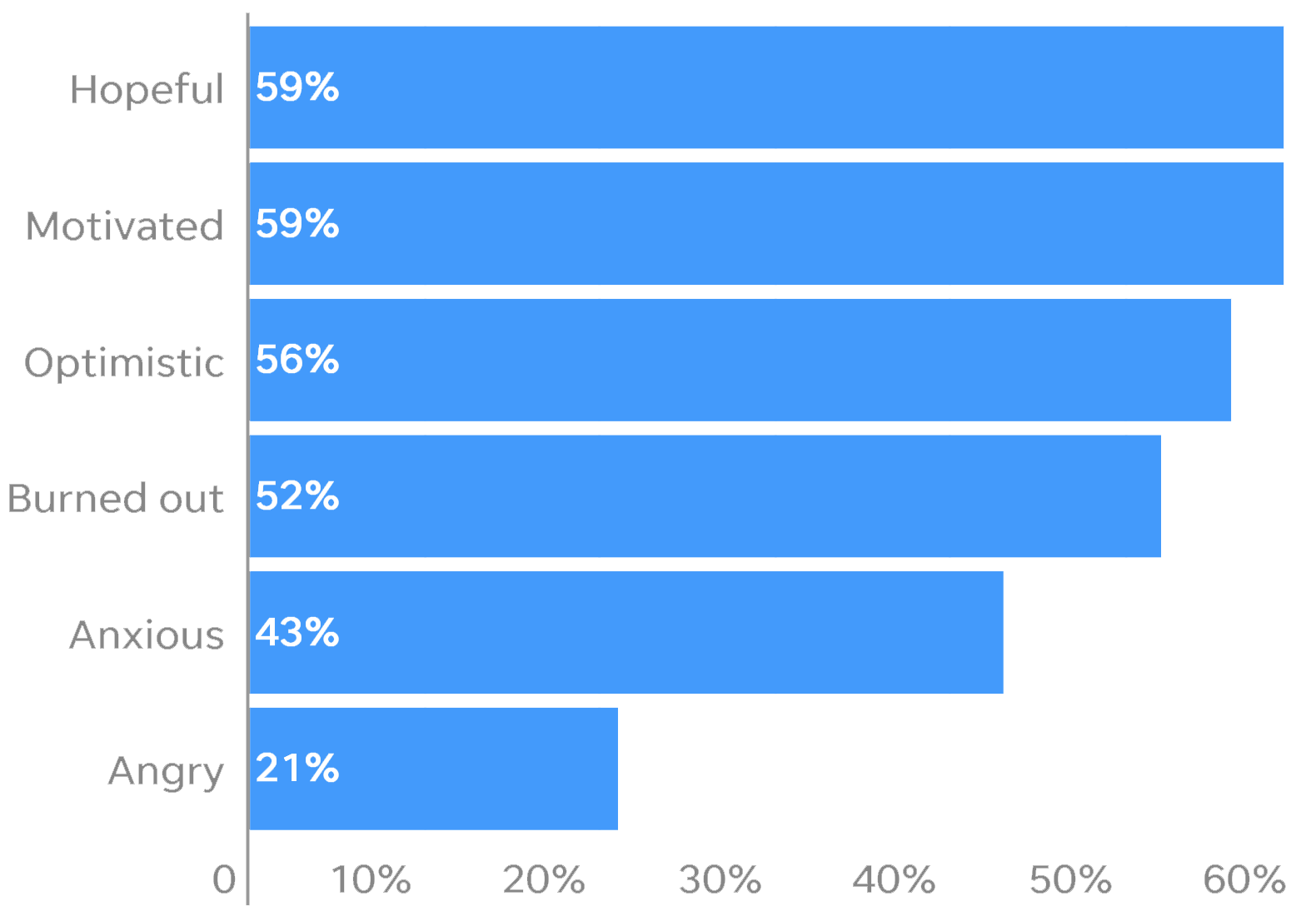 Some warn that the health care system is "on the verge of collapse." In the poll, 39% agreed with that statement. Only 32% disagreed.

"Even before the pandemic, in this field we have constant levels of burnout when you sit back and listen to other people's difficulties all day long, but I would say it worsened with COVID," said Tosha Honey, 33, of Hot Springs, Arkansas. A licensed professional counselor, she works with children who have behavioral and emotional problems. "I'm feeling a little burnout, but I just try to do what I can to recharge and get back in it."

Younger workers report significantly higher levels of stress than older caregivers. Among those under 30, nearly a third, 31%, feel angry. Twice as many, 61%, feel burned out. Those emotions are less prevalent among those 50 and older, although they are still high: 18% feel angry and 45% burned out.

"For health care workers joining the sector in the last five to seven years, COVID provided a brutal exposure to the intensity of life on the front lines," said Steve Girling, president of Ipsos Health Care. Workers of all ages "were pushed to the brink of despair by COVID, delta and omicron variants. They are also some of the most resilient workers in the U.S. economy."

Overall, 23% of all health care workers say they are likely to leave the field soon. As in other fields, COVID-19 has prompted some workers to decide to change careers in what has been dubbed the Great Resignation.

One-third of those surveyed, 34%, aren't sure whether they would decide to go into health care if they could choose a career again. That could signal problems ahead for attracting new health care workers in the post-pandemic world.

No light at the end of this tunnel

In many aspects of American life, pandemic restrictions are being eased as the number of cases of the omicron variant drop. Schools districts have reopened for in-person learning, and governors and mayors across the country are dropping mask mandates.

There is a consensus on this: By 2-1, 61%-31%, they say most Americans are not taking enough precautions in their daily lives to prevent the spread of COVID-19.

I just wish that everybody would practice what they have been encouraged to do, practicing social distancing and hand-washing, all those types of things so that we can get a handle on this thing, then get back to some form of normalcy," said Sherrita Harrison, 47, a mental health therapist in Memphis, Tennessee. "Will masks be incorporated into our lives indefinitely? Who knows?"

Patients who refuse to get vaccinated are the source of particular frustration.

Nine in 10 of the health care workers themselves have gotten at least one dose of a COVID-19 vaccine. Nearly two-thirds have gotten two doses plus a booster shot.

But more than half of those surveyed say they have treated COVID-19 patients they know were unvaccinated. Two-thirds say those patients have continued to express skepticism of or opposition to the vaccine. About 4 in 10 have heard them regret not having gotten the vaccine.

The health care workers give their employers high marks, 75% approval, for responding to the pandemic. The federal Centers for Disease Control and Prevention gets a net positive rating: 54% approve, 34% disapprove. But assessments of the Biden administration are split down the middle, 41%-40%. The news media get a dismal grade, disapproved by 61%.

Ranked at the bottom is the way the American public have responded: 68% disapprove, 18% approve.

"I think it's kind of crazy that we're still here," said Reagan Stinson, 31, a physical therapy assistant from Forth Worth, Texas. "Almost two years later, I wish that people would have taken it more seriously from the beginning."

COVID-19 at home and on the job

Among those who have seen COVID-19 patients, half have treated a patient who died.

"I really wish that the public could see what it's like in an ICU, to see we still have people in the ICU with COVID who now have tracheotomies, who've been on these ventilators for weeks, months," said Fried, the nurse from California. "It's horrific."

"I lost two co-workers at my job to COVID-19," said Luke Howard, 42, of Toledo, Ohio. He is a psychiatric attendant at a state hospital. "We lost a 49-year-old nurse who had no underlying conditions. She was healthy; she wasn't a smoker; she wasn't overweight, and she had an embolism in her lung from COVID-19 and passed away. And then we lost another co-worker, an older guy who had just retired like seven or eight months ago."

Howard has found it all hard to fathom. "He was on a respirator for a long time and didn't make it."

Health care workers have faced a double whammy during the pandemic. They not only find themselves dealing with COVID-19 and its toll at their workplaces, but they also have the same stress and worry as everybody else at home. And some have feared they might carry the virus from work and infect their families.

"I didn't really have to decompress after work before the pandemic," said Shannon Jackson, 38, an optometrist from the town of Washington in rural Georgia. "Now it seems like every day we would really have to stop and take a break to let it all go before we go home."

Four in 10 say they've been irritable and report that their sleep has been disturbed, either because they are sleeping too much or having insomnia. Nearly 3 in 10 report frequent headaches or stomachaches. One in 10 report increased alcohol and drug use.

"We have families and we have personal lives, and we also are stressed and have our own health issues and our own concerns," said Rosa, the mental health counselor from Massachusetts. She and her co-workers feel overwhelmed – just as many of their patients do.

"We relate to a lot of our clients and our patients, and we're just humans, too, and we're trying to do the best that we can do. And we know that you're frustrated that you can't get seen right away or that you have longer wait times," she said. "But we're trying our best."