‘Light at the end of the tunnel’: America’s nurses share their hope and relief as first colleague gets COVID-19 vaccine

More than 270,000 health-care workers contracted COVID-19 and 915 have died as of mid-December, according to the CDC 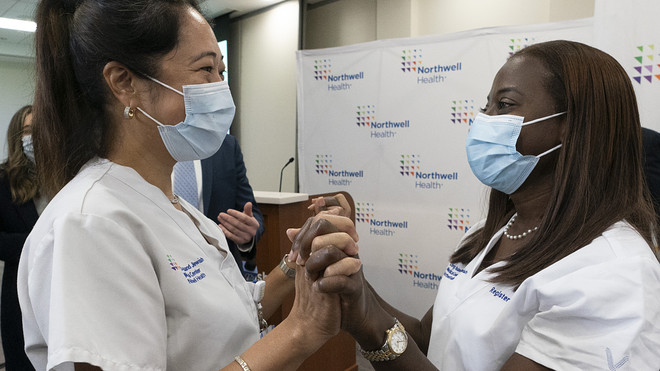 Daniel McCarthy watched a Queens, N.Y. nurse’s televised COVID-19 vaccination Monday to become the first New Yorker with the vaccine and among the earliest ranks with the shot.

One emotion welled inside McCarthy: Relief.

“The vaccine sends the message we are gaining control back,” said McCarthy, a registered nurse working in outpatient care for a Long Island, N.Y.-based hospital system.

In the pandemic’s early spring days, McCarthy stood outside for 15 minutes to calm his nerves before walking inside the home of his first patient recovering from a coronavirus hospitalization.

In those first months, he paid multiple trips to approximately 25 patients. Then there was a lull from summer to early fall, some of those months going without any new patients.

That all changed last month.

“Right after Thanksgiving, I’m started to get bombarded” with new patients — four new patients over the weekend and three the week before that, he noted.

McCarthy doesn’t need to calm himself by his car or linger on doorsteps anymore. “The more you do, the less it hurts. You get numb,” he told MarketWatch.

But that’s why Monday marked a “historic moment,” in McCarthy’s mind. It’s a turning point, he hopes, signaling the beginning of the pandemic’s end and, by extension, his personal need to make emotional numbness a job requirement.

McCarthy completed his vaccination consent form Monday and now he waits to hear when it’s his turn.

‘The more you do, the less it hurts. You get numb.’

More than 270,000 health-care workers have contracted COVID-19 and 915 have died as of mid-December, according to the Centers for Disease Control and Prevention.

Even on a day when American COVID-19 death passed the bleak 300,000-death milestone, others mentioned relief and optimism.

The U.S. Food and Drug Administration granted emergency use authorization for the vaccine on Friday evening.

“I feel like healing is coming. I hope this marks the beginning of the end of a very painful time in our history,” Linsday said, as photographers took her picture.

Don’t miss:Here’s when most Americans will be able to get a COVID-19 vaccine

“I have no fear,” she told CNN. “I trust the science. My profession is deeply rooted in science. I trust science. What I don’t trust is getting COVID-19, because I don’t know how it will affect me and the people around me that I could potentially transfer the virus to.”

“I want to be a part of the solution to put an end to this pandemic once and for all,” Linsday added. “I think also as a leader in the organization that I lead by example. I don’t ask people to do anything that I would not do myself.”

For Mike Hastings, president of the Emergency Nurses Association, a professional organization with more than 52,000 members globally, Monday marked a “curve,” but not a “full 90-degree turn, running to the finish line full blast.”

“There’s still lot more questions, but at least there’s that glimmer of hope,” said Hastings, who is also the clinical manager for Swedish Edmonds Emergency Department in Edmonds, Wash.

For Hastings, those question marks include specifics about the rollout for medical staff and the general public. Hastings is waiting for more information at his own hospital.

And then there’s also the question about vaccine acceptance, and uptake from medical staff and the public as a whole.

Hastings sees that “questioning attitude” personally; he recently spoke with night crew staff to hear out their questions and concerns about the vaccine.

— A survey of almost 13,000 nurses in October by the American Nurses Foundation

Though vaccines can typically take years before going to market, the coronavirus vaccines are taking less than on year.

Hastings and others said, in their review of the results, researchers haven’t cut corners on safety.

Vaccine side effects, usually redness and soreness, typically manifest in the first one to two months, Creech noted. The Pfizer/BioNTech and Moderna MRNA,   vaccine, which awaits a Thursday vote from an FDA advisory committee, showed no serious side effects, the companies said.

For Hastings, the task in the medical profession is clearly explaining the safety evidence to colleagues, and then translating that into understandable information for the general public — all while emphasizing that masks and social distancing are still needed right now.

‘The benefits definitely far outweigh the risks in waiting longer and letting the process take a longer time.’

“The benefits definitely far outweigh the risks in waiting longer and letting the process take a longer time,” said Hastings, who hopes to have his first vaccine shot as early as this week.

The vaccine comes at a time when nurse morale has been pummeled by the pandemic, Hastings said.

“One of the things I’m always concerned about is morale of staff, how to give them energy to come back and do things when it’s so difficult,” said Hastings. “I’m still positive. I’ve got to stay positive. I don’t have an option to get down.”

The vaccination rollout comes with “a mixed bag of emotions,” for Melody Butler, the founding executive director of Nurses Who Vaccinate, a non-profit organization of nurses with no funding from the pharmaceutical industry that advocates the benefits and safety of vaccines to fellow nurses and the general public.

She said she and colleagues are getting cellphone news alerts about the rollout, all while juggling a growing COVID-19 case load.

Butler, a registered nurse who educates hospital staff at a Long Island, N.Y. hospital on infection prevention, said watching Lindsay’s vaccination “was such a moment of hope.”

“It’s the light at the end of the tunnel. We’re not there yet, but it’s a big relief to know there can be an end to this pandemic.”